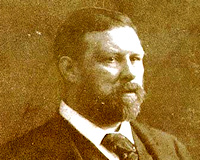 The house where Bram Stoker failed to revive a river jumper.

Description: Irish Dracula-author Bram Stoker lived at several places in Chelsea but it was when he was living here that is most notorious.

On 14 September 1882 at about six o'clock in the evening near Chelsea Embankment he witnessed a man falling (or jumping?) into the river from the steamboat he was travelling to theatre on.

Stoker pulled off some of his clothes, jumped in and sustained the man until a boat came to them. Despite frantic efforts to save the drowning man, he 'persistently kept his face under water'.

He took the very poorly man to his house, laying him out on the kitchen table trying to revive him but he expired.

At the inquest no-one was able to identify the dead man who, because of a tattoo, was presumed to be a soldier.

His wife Florence, previously engaged to Oscar Wilde, was not amused and the event led to marital discord. In 1882 he was awarded a Royal Humane Society Bronze Medal for the heroic gesture.