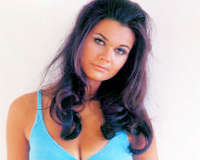 This is the home where Imogen Hassall lived and died.

Description: Imogen Hassall (25 Aug 1942 to 16 Nov 1980), or the Countess of Cleavage, lived and died here. She lived at the house next to the pub The Crooked Billet which she frequented.

Imogen was born in Woking, Surrey. Her godfather was the composer Ivor Novello.

After studying at the London Academy of Music and Dramatic Art, she appeared in classic TV shows including The Saint and The Avengers, but grew more popular as Tara in The Long Duel (1967) and then starring in Carry on Loving and When Dinosaurs Ruled the Earth (both 1970).

She married twice and cultivated a reputation for promiscuity making her a tabloid favourite, and soon the nickname 'the Countess of Cleavage' was coined.

On the morning of November 16th 1980 she was found dead when she failed to meet a friend for a planned holiday. She had committed suicide in London by overdose of the barbiturate Tuinal.

She has a memorial in Wimbleton Cemetery.