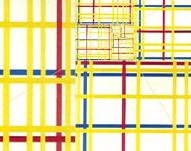 Home to a great artist inspired by London's skyline

Description: He came to London from Paris in September 1938, accompanied by friend and fellow artist Winifred Nicholson, primarily to escape the threat of a German invasion.

With the help of artists Naum Gabo and Ben Nicholson he was quickly settled into a Hampstead flat (there is now a blue plaque marking the spot), receiving gifts of furniture and clothes (including a much-appreciated pair of slippers from Gabo).

He soon transformed his living space into a Mondrian-style space painting over the brown walls and minimal furniture in a brilliant white, with the odd patch of red as if creating a 3D version of his paintings.

From here he laboriously and painstakingly worked on new canvases, greatly influenced by different surroundings that of the empty wide streets and imposing residential blocks in Belsize Park and Hampstead, as well as ancient tourist sites such as the Tower of London. He sent postcards of these new places to his brother Carel, telling him excitedly of his progress in his new city.

As well as these architectural curiosities, Mondrian sent his brother a whole series of uncharacteristically lighthearted postcards of Disney's Snow White (which he had seen with his brother in Paris in early 1938), most written in the playful personae of several of the dwarves in the film. It shows a very different side to the usually sombre artist.

Banksy Off His Trolley», 2.9km

Bridge That Curls Up Into a Ball», 14.km