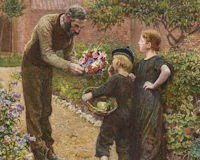 The home where painter Frederick Walker was born.

Description: Frederick Walker (18401875) was a British social/realist painter and illustrator, once described by Sir John Everett Millais as the greatest artist of the century.

He was born in this house, the elder of twins and the 5th son of Jeweller William Henry. His grandfather William Walker was also an artist who had exhibited regularly at the Royal Academy and British Institution between 17821802.

He showed a talent for art from an early age teaching himself to copy prints using pen and ink, and worked in an architect's office but gave it up to become a student at the British Museum and at James Mathews Leigh's art school. In March 1858 he was admitted as a student at the Royal Academy.

His breakthrough watercolour, Strange Faces, came in 1862 (now at the Yale Center for British Art in New Haven). Walker exhibited at the Royal Watercolour Society from 1864 until the end of his life, becoming an associate member in February 1864.

Birthplace of the Pre-Raphaelite», 0.4km