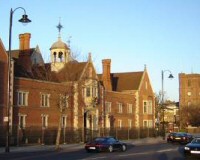 The medieval building that moved brick by brick from the city.

Description: This house originally stood in Bishopsgate, where it was the Great Hall of the 15th century Crosby Place.

Shakespeare was familiar with this former city mansion, and wrote it into 'Richard III' as the scene of Gloucester's plotting. The building was occupied by Richard while he was Duke of Gloucester. Later it was owned by Sir Thomas More.

The Hall was moved stone by stone from Bishopsgate to Chelsea in 1910 in order to rescue it from proposed demolition. It was then incorporated into the buildings of the British Federation of University Women and used as a dining hall. It is now a private residence.

A modern banking house stands on the original Bishopsgate site, and it bears a plaque to mark the hall's existence.