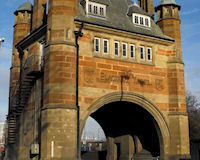 The striking neo-gothic gatehouse near the Blackwall Tunnel.

Description: This is the striking southern entrance gateway to the Blackwall Tunnel, also known as Southern Tunnel House.

It was designed by LCC architect Thomas Blashill and was built just before the tunnel was completed. Originally, a single bore tunnel, the Eastern bore was added in 1967.

The red sandstone brick entrance comprises two floors with an attic. A plaque adorns the inner wall, but only traffic can see this now!

The tunnel was officially opened on 22 May 1897 by the Prince of Wales who declared it 'open to the public for ever'.


The Ugliest Building in London», 9.5km

Architecture Not To Be Missed», 11.km