The Murder of Aristos 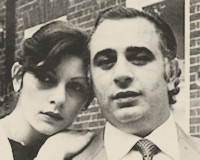 The scene of one of London's most intriguing unsolved murders.

Description: This is the house where Greek Cypriot fashion tycoon Aristos Constantinou was shot dead on New Year's Day, 1985, with seven silver bullets.

It happened in his own chapel while praying, and has served to heighten security on this most prestigious of roads where houses can now fetch a lot more than 40m.

Despite two police investigations, a string of appeals and reconstructions, his killer has never been caught.

Aristos arrived in Britain in the early 1960s and enrolled at the London School of Fashion, before working out of a back room in Carnaby Street, creating the kind of styles that came to define Swinging London.

His brother Achilleas joined him and together they created Ariella Fashions, still a successful brand today. Achilleas lived next door to Aristos on The Bishops Avenue.

The house has seven bedrooms, numerous reception rooms and bathrooms and stands in 2.5 acres.

Aristos had fallen in love with one of his salesgirls, a captivatingly beautiful 17-year-old known then as Helen. One of the first things he did when she accepted his proposal was to tour the West End buying up copies of the girlie magazines for which she had posed.

She was there that night and she claimed that they disturbed burglars who killed Aristos as she escaped.

The Assassination of Mr Thynne», 4.8km