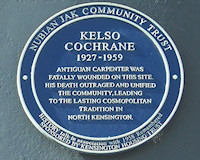 Description: This is the place where Antiguan immigrant Kelso Cochrane was murdered on the 17th May 1959. His murder remains unsolved.

He was a carpenter and after fracturing his thumb in a work-related accident, he attended Paddington General Hospital. While walking home, shortly after midnight, he was set upon by a group of white youths, who stabbed him. He was taken back to hospital where he later died.

The race riots had kicked off the previous year and it sparked further debate.

1959 also saw activist Claudia Jones organise an event to celebrate Caribbean culture in the face of the hate from the white racists, which are seen as forerunners of the first Notting Hill Carnival in 1964.