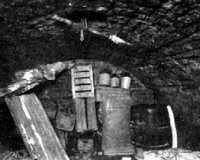 The location of Voisin's murder of Miss Gerard in 1917.

He was attractive to ladies of his own nationality. Wednesday, 31st October, 1917 a Mme Emilienne Gerard came to his flat to shelter from the threatened air raid.

She found that a new lover Berthe Roche was now a live in lover of Voisin. The ladies came to blows and Voisin tried to intervene, but somehow he and Roche battered Mme Gerard to death.

Voisin soon put his butcher skills to work and cut up Gerard to small portions, and then packed them in a brown paper parcel.

To make it look like a racist attack Voisin wrote on the parcel 'Bloody Belgium' spelt wrongly as, 'Blodie Belgiam' loaded the parcels onto his cart and left them by railings in Regent Square near Judd Street, Bloomsbury.

They were found next morning, and soon traced back to Voisin, he was soon caught out, when a police officer trapped him into repeating his mis-spelling again. A search of the flat found bloodstains, and tucked away in a barrel (right of scene, pictured) were the head and hands of Mme Gerard.

Voisin was hanged at Pentonville on Saturday 2nd March, 1918, and Berthe died while in prison serving her long sentance.

The Assassination of Mr Thynne», 0.9km