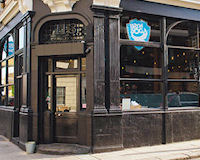 Description: Now a rather decent Brewdog Alehouse, this was formerly The Laurel Tree and a seminal place for 90's music.

Britpop legends Blur, Elastica, Jesus and Mary Chain, Suede and Pulp were regulars at its northern soul and mod club night, Blow Up. And then later Coldplay had their first gig here.

It saw Damon Albarn, Jarvis Cocker, Brett Anderson as regulars before closing in 1999 3 years after Blow Up had already moved on into Soho.

Originally Blow Up was founded by DJ and promoter Paul Tunkin in 1993 as a reaction to the styleless US Grunge scene invading the charts at the time. Melody Maker magazine said it was The Club That Changed The World.

Rule Brittania in The Dove», 5.2km