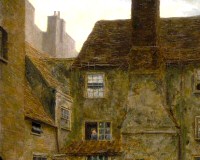 The location of The Queen's Head, John Harvard's family tavern.

Description: John Harvard (1607-1638) was born in Southwark and christened at St. Saviour's (Southwark Cathedral), where there's a transept devoted to him.

His family owned the Queen's Head Inn, formerly at 103 Borough High Street, Southwark, and the proceeds of the sale financed Harvard in the New World.

John's mother, Katherine, lost husband Robert and four of her children to the Southwark Plague of 1625. Katherine remarried twice, and acquired ownership of the Queen's Head Inn on Borough Street.

When Katherine died in 1635, the inn went to John, who maintained it for a short time before his departure for America.

The Queen's Head no longer exists as a tavern. The inn started life as the Cross Key Inn but presumably its name was changed in an effort to please Elizabeth I.

In about 1668, after going through a succession of owners, the buildings to the rear of the inn were given over for the use of St Saviour's Grammar School and the Company of Saddlers'. A year later the inn was bought by local brewer, John Applebee, in whose charge it remained until it was pulled down.

The image is of The Back Yard of the Queen's Head Inn, Southwark, 1884.