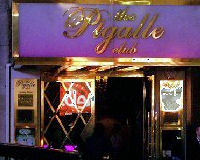 The infamous Pigalle club home to the stars.

Description: Currently a cabaret club, and originally a dinner and dancing club and before that an adult cinema.

It's most famous however for being the location of the La Pigalle club which has featured Frank Sinatra, Shirley Bassey, Eartha Kitt, Sinead O'Connor and Duffy on stage here.

The Beatles even played here after hotfooting it from 10,000 arena show at Wembley on 21st April 1963 to perform at a Jewish charity event here.