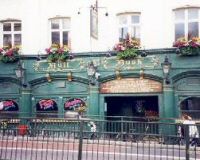 Description: The Crawdaddy Club used to be here as part of the Station Hotel, and was the London equivalent of Liverpool's Cavern Club.

The Rolling Stones were the house band at the Crawdaddy, and the Beatles first heard them play here in 1963. The Yardbirds were regulars too.

1» The venue has now turned into Edwards Nightclub, located directly across from the Richmond train station. (Ranney Lochtefeld)
Posted by Ranney Lochtefeld on 2006-12-11