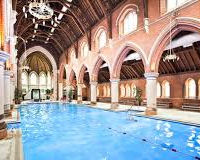 This plush estate and gym complex was formerly an asylum.

After six years, the hospital finally opened its doors to patients on May 1883, where they were charged 30 shillings a week. Once full, it catered for 2,500 patients, and became one of the countrys pioneering mental health establishments.

It was the first asylum in the country to be home to a research building, specifically dedicated to finding new ways of improving ill mental health.

People who used to work at the hospital before it closed in 1997 are convinced they saw the ghosts of disturbed patients still roaming around the buildings. Even new residents have been wary of spooky goings on, with a mother and daughter moving out of the old juvenile hospital where a girl committed suicide because they were too 'freaked out'.