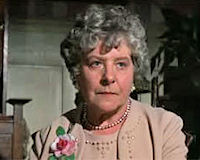 This is where the actress Irene Handl lived and died.

Description: Actress Irene Handl was a latecomer to showbusiness, making her London stage debut in February 1937.

She went on to appear in over a hundred British films in supporting roles, mostly comedy character parts such as slightly eccentric mothers, grannies, landladies and servants.

Among many stage appearances, she played Lady Bracknell in The Importance of Being Earnest in 1975, and also in celebrated classics Night Train to Munich, Spellbound and Brief Encounter. She played Peter Sellers' wife in I'm All Right Jack and Tony Hancock's landlady in The Rebel.

Her final appearance was in the BBC sitcom In Sickness and in Health in 1987, just before her death here on 29th November 1987 at the age of 85.