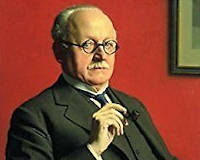 This is where celebrated architect Sir Edwin Lutyens was born.

He was largely a self-trained architect of some renown, designing more than 35 country houses including Castle Drogo in Devon and the refurbishment of Northumberland's spectacularly sited Lindisfarne Castle.

As leading light of his field he was asked to design the Hampstead Garden Suburb and the design of the new Indian capital in New Delhi.

He was knighted in 1918 for his contributions in India and for his advice to the Imperial War Graves Commission, for whom he contributed designs for a) Cenotaph in Whitehall, b) Memorial to the Missing of the Somme in Thiepval in northern France, c) Australian War Memorial at Villers-Bretonneux and d) the Anglo-Boer War Memorial in Johannesburg.

The Nose in Admiralty Arch», 2.1km