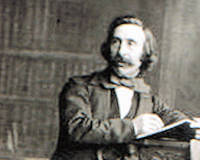 This is where Irish Sculptor JH Foley lived (and died).

Description: This is where Dublin-born John Henry Foley RA (18181874) lived and died. He is best known for his statues of Daniel O'Connell in Dublin and that of Prince Albert for the Albert Memorial in London.

At 13 he won awards at the Royal Dublin Society, and at just 17 was admitted to the school of the Royal Academy in London.

Inspired by the Great Exhibition in 1851, the Corporation of London voted a sum of 10,000 to be spent on sculpture to decorate the Egyptian Hall in the Mansion House, Foley was commissioned to make sculptures of Caractacus and Egeria.

Foley died at Hampstead on the 27th August 1874, and was buried in St. Paul's Cathedral. His reputation took a dent in 1922 when, after the founding of the Irish Free State, a number of Foley's works were removed, or destroyed without notice, because those portrayed were considered hostile to the process of Irish independence.

The Statue that Copies You», 5.1km