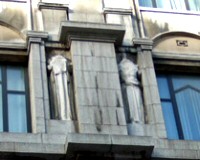 The site where a man was hit by a falling stone penis.

Description: Zimbabwe House at 429 Strand in central London is the Zimbabwean Embassy.

The building was built by architect Charles Holden in 1907-8 as the headquarters of the British Medical Association and featured a series of sculptures by Jacob Epstein representing the Ages of Man, his first major commission in London.

The nakedness of many of these male sculptures was initially shocking to Edwardian sensibilities and provoked considerable controversy at the time. Father Bernhard Vaughn, a member of the National Vigilance Society raged in the paper that:

As a Christian in a Christian City, I claim the right to say that I object most emphatically to such indecent statuary being thrust upon my view.


In the 1930's a gentleman pedestrian was struck on the head by a falling stone phallus from one of the statues, and the other statues were also rendered eunuch's to prevent similar mishaps.

The Statue that Copies You», 1.0km