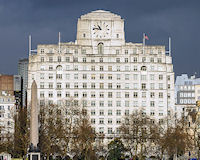 The local of the former Hotel Cecil where the RAF was formed.

Description: Shell Mex House is a striking art deco grade II listed building built in 1930 on the former site of the Hotel Cecil, one of the biggest and most luxurious in Europe with over 800 rooms when it opened in 1886.

The Royal Air Force was formed in the hotel and had its first headquarters here on the 1st April 1918. A green plaque marks the site.

The building was for many years the London headquarters of Shell-Mex and BP Ltd for who it was originally built, but most of the building today houses companies run by Pearson.

Unusually, it is situated behind the original facade of the Hotel Cecil, inbetween the Adelphi and the Savoy Hotel.

From the River it stands out as one of the most identifiable buildings because of it's massive clock face, the largest in England, larger than Big Ben even.

In the final scene of the 2016 action-game-made-film Assassin's Creed, the hero Callum Lynch and two other surviving assassins stand astride Shell Mex House and survey London.