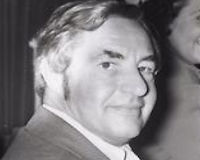 This is where playwright Ted Willis lived.

Description: This is the former home of Baron Ted Willis (1914-1992) - a British playwright, novelist, screenwriter and ardent supporter of the Labour Party.

Born in Tottenham, Willis was elected Chairman of the Labour League of Youth as their candidate of the left in 1937, and 4 years later became Secretary General of the Young Communist League.

Ted was most renowned for long-running television crime series Dixon of Dock Green. These were based on the real-life stories of Gordon Snashall - a friend and local Chislehurst policeman. He also made television series Virgin of the Secret Service, Hunter's Walk, The Adventures of Black Beauty, Copper's End, Sergeant Cork and Mrs Thursday.

He was Chairman of the Writers' Guild of Great Britain from 1958 to 1964 and he was listed in the Guinness Book of Records as the world's most prolific writer for television, and also wrote 34 stage plays and 39 feature films.