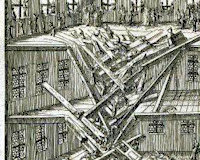 The location of a terrible disaster in Catholic history.

Description: The Fatal Vespers was the name for a long-forgotten disaster in Blackfriars, London.

It happened here at the French Ambassador's house on Sunday the 26th October 1623. The top floor collapsed under the weight of more than three hundred people who were attending a Roman Catholic congregation service led by two Jesuits; Robert Drury and William Whittingham.

While Drury was preaching the great weight of the crowd suddenly snapped the main summer-beam of the floor, which instantly crashed in and fell into the room below.

The main beams there also snapped and broke through to the ambassador's drawing-room over the gate-house, a distance of twenty-two feet.

The two Jesuits were among the ninety-five who sadly lost their lives, while many others sustained serious injuries. In the corners, being less crowded, the floor stood firm, and some of these survivors cut through the wall to safety beyond.