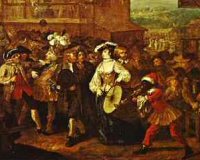 The location for Hogarth's painting of the old Southwark Fair.

Description: This is generally thought of as being the place where in 1733 Hogarth painted his chaotic Southwark Fair picture from.

The Southwark Fair, also known as Our Lady's Fair or as St. Margaret's Fair, was made official in 1462 by Edward IV. It used to last up to 14 days in September, beyond the three days allowed by Royal Charter. It was one of the three great fairs of importance described in Charles I's proclamation.

The fair wouldn't last long after this painting was taken, and in 1762 it was suppressed.

It is possible that Hogarth did not originally intend for this work to be a true depiction of the Southwark Fair. Indeed, this work was originally called The Humours of the Fair, a more general title. Only two features distinguish the scene. First, the bell tower of the Church of St. George the Martyr, which was demolished at approximately the time of the Southwark Fair in 1733, looms in the background. Second, Hogarth included a time stamp in the work. One of the stage cloths supposedly advertising the Fall of Bajazet is a copy of The Stage Mutiny, etched by John Laguerre, dealing with a dispute between the managers and some of the actors of Drury Lane Theatre of that year. 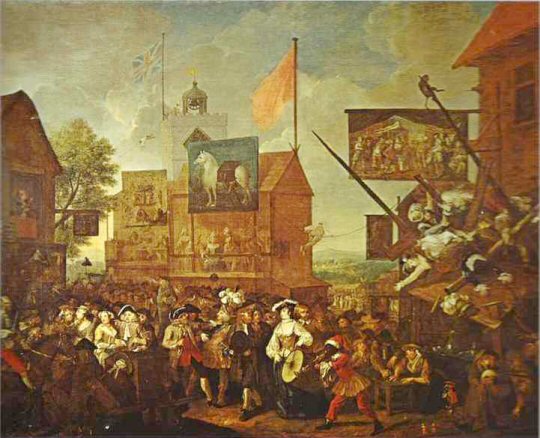 
If Graffiti Changed Anything», 2.3km