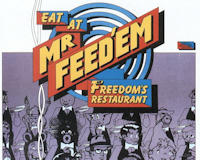 Description: Mr Freedom was a 1960's clothing boutique which sold cutting-edge pop punk fashion by a number of young designers commissioned by the owner Tommy Gun and his partner Trevor McCoy. Their first shop was in the King's Road before moving here in 1970.

The store also sold Pop art furniture by designer Jon Weallans, including things like iconic chairs in the form of a pair of false teeth.

Mr Freedom added a small restaurant to its basement in 1971, called Mr Feed'em. The interior design was noted in the media as a fascinating draw for the public: Stylistically, it defies analysis. It is almost impossible to detect at what point the patient, period reconstructions shade into pastiche. In Pop Punk style most of their food was out there, dyed burgers, rice, chips in all colours of the rainbow, with high prices attracting customers like Rod Stewart.

Former Toilet for your Jeweller», 1.9km