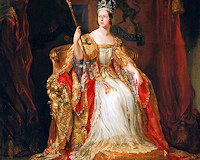 Description: This fine Georgian townhouse or mansion house dating from 1726 was built by 'carpenter and gentleman', William Taylor.

He lived here initially and by 1743 silk weavers Judith Signeratt and Co were based here using the attic to house their loom. Two years later Gideon Bourdillon had moved in next door in number 16 and formed a new company forthwith 'Sequeret and Bourdillion Co', knocking through to join the houses and staffing fourteen of their workmen.

Between 1766 and 1773 the two houses were occupied satin weaver Daniel West, whose daughter Ann married silk manufacturer Stephen Wilson and lived here from 1778 to 1798. Their son Daniel Wilson (17781858) was born here and later became the Bishop of Calcutta in 1832.

In 1824 the two houses were separated again, and the legend goes that the silk for Queen Victoria's Coronation gown (1838) was woven here.

In 1881 the house was leased for use as a Home for Working Boys, where it was known as Howard House, until 1926.

The splendid interiors feature a unique hardwood staircase balustrade is carved to display fluted columns with Ionic capitals placed on each turn for one hundred steps. Indeed, each step is expertly carved with a masterly design of hops, barley, and wild roses.

Home to the Geisha Kimonos», 3.2km

Former Toilet for your Jeweller», 3.2km