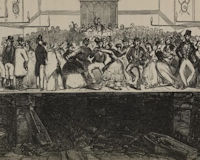 Description: Today it's parts of the LSE but from 1823 to 1852 it was a chapel and the vault was used for burials.

The Burial Act of 1852 closed all burial grounds in London, including the chapel here whose main business was from determents. It then became a theatre and dancing saloon, before being demolished.

It was below the floorboards however that was the concern. Worshippers put up with noxious fumes, insects and sickness for years before being investigated.

It turned out that a Reverend Howse had offered cut-price burials for a low fee of just 15 shillings. In 1840, a House of Lords select committee stated that the remains of ten or twelve thousand bodies had been concealed here. Pretty impressive considering it was only 18m by 12m.

It is thought that the sheer volume was hastened on their way using various nasty techniques, nearly all into the sewers.

The floor was bricked over and became a theatre and circus for a while, with one promotional flyer stating Enon Chapel - Dancing on the Dead - Admission Threepence. No lady or gentleman admitted unless wearing shoes and stockings.

The Field of Forty Footsteps», 0.8km

Manson and the Talgarth Hotel», 4.2km