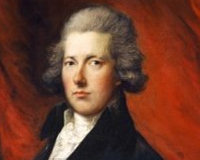 Description: This is where the former Prime Minister William Pitt The Younger (17591806) lived and subsequently passed away (it was then 14 York Place). But he didnt pass before uttering some of the most infamous last words I think I could fancy one of Bellamy's veal pies. Although some sources say it was mutton he muttered.

The Field of Forty Footsteps», 1.1km

Manson and the Talgarth Hotel», 3.1km