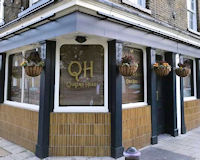 Description: This former Limehouse pub (sadly now closed permanently in 2019) was the pub featured in the 1987 famous photograph of Queen Elizabeth the Queen Mother pulling a pint.

Dating back to the early 19th century the Queen originally commemorated was likely to have been George IIIs wife Queen Caroline.

This popular Poplar pub is believed to be the inspiration for EastEnders The Queen Vic.

In 2016 when nearby pub The Widows Son was closed, their tradition of the Widows Buns transferred temporarily here, together with a representative of HMS President and Sir Ian McKellen (who performed The Ballad of the Widow's Son).

After noise-related complaints and investigations into lockdown breaking parties in 2020, the license for this Grade II listed building and Asset of Community Value was revoked.