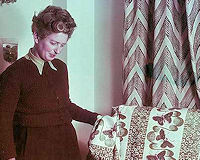 Description: Enid Marx (19021998) was a pioneering pattern designer, illustrator and artist and she lived and worked here from 1965 to her death in 1998. She was known by friends simply as Marco, and was a distant cousin of Karl Marx.

Her two most notable work includes the 1937 commission to design the celebrated seating fabric for the London Underground, and the 1953 design for postage stamps marking the start of Queen Elizabeth IIs reign.

In the 1940s she wrote and illustrated childrens books, including Bulgy the Barrage Balloon (1941), which sold out its first edition of 5,000 and was reprinted.

In 1957 the London Zoo adopted two of her prints for their posters.

Marx was the first female engraver to be designated as a Royal Designer for Industry.

In the early 1960s her friend Margaret Lambert bought this mid-19th-century three-storey house in Islington, which she shared with her friend Eleanor Bruening, Lambert's sister Grace and Marx who lived and worked in what was known as the 'mews cottage', a self-contained renovation of the original carriage house to the right-hand side.

A blue plaque was unveiled here by English Heritage in April 2022.