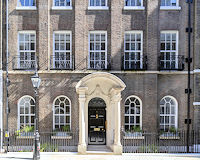 Rule1: When running from the police dont go into the cul-de-sac.

Description: This cul-de-sac was originally designed by Robert Adam in the 1770s, and completed in 1778. It's one of the few surviving examples of speculative building in the City of London dating from this era.

The building to give way is the mansion of Lord Mayor of London Sir John Frederick, 1st Barone. It was demolished in 1776 but the name is still called Frederick's Place.

The Great House, or number 6, is the largest property in the development, with a six-bay principal faade. It is the best preserved of the houses, and retains Adam interiors including the first-floor drawing room ceiling.

Fredericks Place was also the scene of the re-arrest of suspected Saffron Waldon forger Samuel Herbert Dougal in March 1903. He was being escorted from the Bank of England to the Old Jewry (headquarters of the City Police) when he escaped on foot and ran into Frederick's Place to escape, not realising there was no exit.