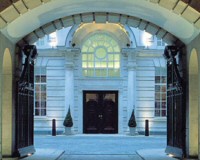 This is where Oliver Reed's The Three Musketeers was filmed.

Description: This hotel used to the headquarters of the Pearl Assurance company, but it was transformed into a luxury hotel at the end of the nineties, since when it's appeared in many films including the classic Seventies film The Three Musketeers, starring Faye Dunaway and Oliver Reed, Howard's End, Wilde and The Saint, as well as TV's Poirot.

Due to the configuration of the hotel, each of the 356 guest rooms and 13 suites is unique, with seven different types of marble used throughout the building.

These include Swedish Green marble on the panelling and the columns in the East Banking Hall, which is now so rare that a metre cube costs in excess of Â£30,000. Another of the marbles, a fine white known as Statuary, used for flooring and panelling, has been unavailable for almost 40 years.

And wait until you see the sweeping spiral Grand Staircase, a Renaissance-style architectural tour-de-force in Pavonnazo marble.

It has been estimated that to build an equivalent staircase today would cost in excess of Â£40m. But such opulence would count for nothing if the Chancery Court were not one of the most relaxing destinations in Central London, truly one of its hidden gems.

The London Chancery Court Hotel sits behind the Beaux Epoch facade designed by Moncton and Newman in 1912 but not completed until the 1960's.