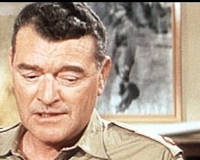 This is where Zulu actor Jack Hawkins was born.

Hawkins was born here, the son of a builder and was educated at Wood Green's Trinity County Grammar School, where he joined the school choir. He was enrolled first in the local operatic society, and second, in the Italia Conti Academy.

In 1932 he married award-winning actress (star of Driving Miss Daisy) Jessica Tandy but it only lasted 8 years.

He died in Chelsea, London in 1973 following an experimental operation to insert a voicebox following throat cancer.

Bond and the Traffic Wardens», 7.2km