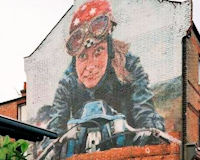 The first female TT racer all the way from Walthamstow.

Description: Beryl Swain was a female motorcycle road racer famous for being the first solo woman to compete in a TT race on the perilous Isle of Man TT course.

Beryl Jean Tolman was born on the 22nd January 1936 living here at 54 Marlowe Road until 1962. The house was demolished in the mid 1960s to make way for the Marlowe Road Estate (recently redeveloped once again).

She married Edwin Swain, a motorcycle shop owner in 1958 at St Mary's Church in Walthamstow village. Eddie was a motorcycle racer who ran his own shop and repair business, the Connaught Sport garage, in Stoke Newington. Beryl helped prepare bikes in the workshop and Eddie bought her her first motorcycle, a 98cc Moto Guzzi Zigolo.

She became a member of several motorcycle clubs and soon was entering races at Crystal Palace, Snetterton and Brands Hatch, in the small and manoeuvrable 50cc class.

Begins - Beryl Swain is a shorthand typist and comes from Walthamstow, London, E.17. She started 50cc racing in 1959, and since then has several times been placed between fourth and eighth at Brand's Hatch, Crystal Palace, Gosling Stadium, Silverstone, Snetterton, etc.

As is generally known, she is the first, and so far the only, woman driver in the T.T. races. Beryl tells us that her machine is tuned and prepared by her husband. He does all the hard work, she says, I just ride it. Hobbies: Gardening, knitting and making all her own clothes. ends.