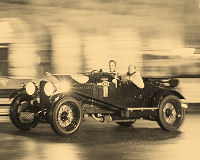 This is where the first Bentley car was produced in 1919!

Description: This is the birthplace of the Bentley motor car, it's where number one was produced in 1919.

The first Bentley 3-litre engine was tested, developed and built here in October 1919.

W.O. worked with railway engine legends at Doncaster Works and went on to make his name during the First World War when he powered such famous aeroplanes as the Sopwith Camel.