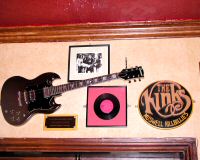 The Kinks local boozer when they were growing up.

Description: The Clissold Arms is a normal British boozer with a huge display of Kinks memorabilia at the back.

Among them is a signed copy of the Kinks' first single, a cover of Little Richard's Long Tall Sally, a guitar, a wall of photographs and a small brass plaque which reads: Site of 1957 performing debut of Ray and Dave Davies. Founding members of the Kinks.

Dave Davies's song Fortis Green goes: 'Mum would shout and scream when dad would come home drunk, When she'd ask him where he'd been, he said Up The Clissold Arms, Chattin' up some hussy, but he didn't mean no harm.'

The Kinks were all local boys to this pub.