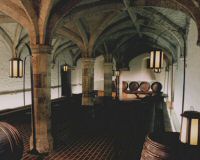 Description: This is where old Whitehall Palace once existed, and the only remaining feature (since the Palace burned down in 1698) is Henry VIII's wine cellar.

It's an astonishing Tudor brick-vaulted cavern built in 1536 some 70 feet long and 30 feet wide, perfectly preserved under the MOD.

When renovation was required in the early 20th Century, between the wars, Queen Mary in 1938 requested that provision be made for the preservation of the Wine Cellar.

However the position of the Cellar, used in the years immediately prior to the demolition of Cadogan House which surrounded it, as a luncheon club for Ministry of Transport staff, was found to interfere not just with the plan for the new building but also with the proposed route for Horse Guards Avenue. Accordingly, once building was resumed after the war, work was set in hand to relocate the whole Cellar into the new building itself, moving it both some nine feet to the west and nearly nineteen feet deeper. This major operation was carried out without significant damage to the structure and it now rests safe within the basement of the new building.

A Birdcage with a difference», 0.3km