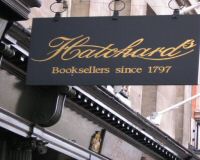 Hatchards is the oldest surviving bookshop in Britain.

Description: This is the location of the original Hatchard's bookshop - one of the oldest (founded in 1797) and most famous bookshops in Europe - and booksellers to the Royal Household.

Aided perhaps by the shortness of his name, Sir Alec Rose, the yachtsman, signed 1250 copies of his book during just one session, a record still unbroken!

1» Hello. Im a relation to the founder of this bookshop and have an oil painted portait of James Vickers an employee of the shop. He was born 2nd January 1761. A note on the reverse of the painting says he was unmarried and was a good man. Hope this is of some interest to you. (Lorna Hatchard)
Posted by Lorna Hatchard on 2009-04-15