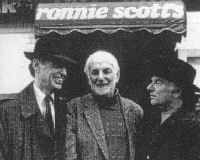 This is where the first Ronnie Scott's was open until 1965.

Scott hit his 32nd birthday early in 1959 and he and fellow tenor saxophonist and personal friend, Pete King, started looking round for suitable premises to establish a club and came up with 39 Gerrard Street, Soho.

For a while it had been used as a kind of rest room for taxi drivers, and had occasionally, as a tea-bar, also been a haunt for local musicians. To begin with, the plan was simply to provide a place where British jazz musicians could jam.

The appearance of many jazz giants really put the Club on the map and the fortunes of the enterprise improved to such an extent that King and Scott had to go in search of bigger premises - Frith Street.