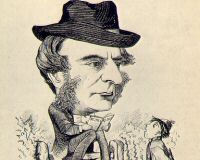 Description: Author and historian Charles Kingsley (1819-1875) lived here. He wrote Westward Ho and the Water Babies, and in 1860 he was appointed to the Professorship of Modern History at Cambridge, which he held until 1869.

1» I was lucky enough to live in The Rectory for 3-years between 1985-88. At that stage the main elements of the house were in reasonable repair, but the wing was run down to say the least. The Rectory was then owned by a Kuwaiti businessman who employed my sister as his PA in London. He invited her to live in the house, rent free, along with close friends and family, to avoid squatters taking over the property. It was his intent to refurbish the residence back to its former glory (he was an architect), but following the Kuwait Stock Market crash, his funds were needed elsewhere. Prior to his fall from grace, Alan Bond, former Chairman and CEO of the Bond Corporation looked to purchase the property as a base for his top UK-based executives, but that deal fell through. I believe it was subsequently sold to a Norweigian shipping tycoon. The best feature of the Rectory (bar its location) was the garden. We enjoyed numerous parties in the house, easily hosting upwards of 200 people; friends, friends of friends etc. It was also home to hundreds of rabbits following one particularly alcoholic party where the two bucks were mistakenly allowed out of their hutch, never to go back in! They were great days and it was a fabulous address to borrow, albeit only for 3-years. (Andrew Barriball)
Posted by Andrew Barriball on 2007-09-09