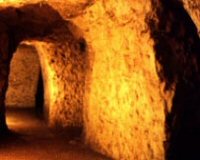 Description: Chislehurst Caves are a labyrinth of dark mysterious passageways which have been hewn by hand from the chalk, deep beneath Chislehurst. There are over 20 miles of caverns and passageways, dug over a period of 8000 years. The vast complex of caves are a maze of ancient mines originally carved out in the search for flint and chalk.

During the 1914 World War the mines became part of Woolwich Arsenal, used as an ammunitions depot. A narrow gauge railway was installed to aid the transport through the passages. Up until the outbreak of the Second World War the mines were used by the Kent Mushroom Company.
The war and the constant bombings over London turned the caves into a massive air raid shelter within easy reach from London and its main suburbs.
The caves again became a major tourist attraction early this century.

The Caves are also used as a film location and have been used by the BBC and independent film companies. Doctor Who, Insemenoid, Bliss, Neverwhere and Randall & Hopkirk (deceased) have all been filmed at the caves.

The Caves feature nine druids altars and many think could be the site of Merlin's secret lodge.

2» i had a fun day out with my school (leigh-ann Miller)
Posted by leigh-ann Miller on 2011-03-18
1» Being from the United States, my wife and I were truly astounded when we toured the caves a few years ago. We had never heard of them nor their fascinating history. Visiting them is truly a mystical and worthwhile experience. We recommend a visit to them to anyone that we know is visiting London. (fwine36)
Posted by fwine36 on 2007-07-05