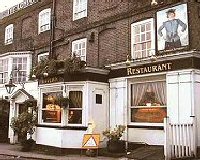 Description: The pub first opened in 1731 and used to be kept open all night for people travelling on the river, from which this pub has great views.

The name London Apprentice is said to come from the apprentices working at London's livery companies who used to row out to Isleworth in colourful barges during their free time.

Charles Dickens and Oliver Cromwell are supposed to have drunk here.

It's also rumoured to have tunnels from the cellar to the local church, as used by smugglers to store contraband and cash in the crypt.