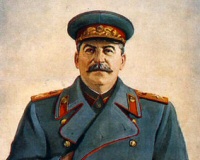 This is where Stalin lived as a political refugee.

Description: When a young Stepney housewife answered a knock on her front door at this house on March 5, 1953, she expected to find one of her friends or neighbours on the other side maybe even her mum, who lived next door.

But Golda Berk was in for a shock. Standing outside her tenement door in Jubilee Street were reporters from radio stations and newspapers and not just from Fleet Street but all around the world.

Joseph Stalin, who had just died in Russia, had lodged at 75 Jubilee Street as an impoverished young political refugee 46 years before.

Stalin ruthlessly suppressed dissent, murdered his rivals and resettled peasants thousands of miles from their homes. Stalins triumph was to halt the march of Hitlers armies, with his peoples resolute stand at the siege of Leningrad and the Battle of Stalingrad.

Embassy of Ecuador and Assange», 4.8km