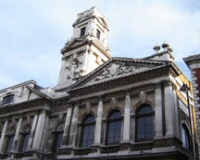 Description: The baroque exterior of this grand venue, which recently opened its doors to the events market, towers over its surroundings with the same stateliness as it did at its unveiling in 1866. The pillared entrance hall leads through to two fantastic spaces; the high-ceilinged Council Chamber & the marble-walled Assembly Hall.

One of the most gruesome events at Shoreditch Town Hall was the Inquest into the last of the Jack the Ripper killings - that of Mary Jane Kelly. She was found murdered in a squalid lodging house in Dorset Street - now the site of White's Row multi-storey car park in Spitalfields.

The inquest opened on 12th November 1888 and the squalid details of the killing; the shocking mutilation of her body by the murderer - who was never caught - and the pathetic picture that emerged of Mary Kelly's margined life caused a sensation. For its duration the proceedings at Shoreditch Town Hall were given coverage in both penny dreadfuls and in the respectable national newspapers; newspapers throughout the world sent reporters to cover the Inquest.

In the second half of the Twentieth century Shoreditch Town Hall was London's premier boxing venue. The tragic death of Trinidadian heavy-weight champion Ulric Regis following a bout with Joe Bugner at Shoreditch led to a total ban on fights in Hackney.

An episode of Bad Girls was filmed here in 2006.

The Battle of Cable Street», 1.2km