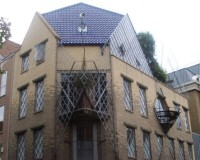 The house designed by Piers Gough for Janet Street-Porter

Description: No longer her house, but still remarkable for it's modernist architecture.

In 1987 she commissioned a house from CZWG Architects in Clerkenwell, and it was designed by Piers Gough. It is in an eye-catching design, notable among the largely Georgian houses in the area.

It is a riot of beautiful rubbed and gauged brickwork in deep red bricks a nice change from the ubiquitous yellow London stock.

Janet lived here for 15 years, and is a much sought after property.


Architecture Not To Be Missed», 7.0km

The Nose in Admiralty Arch», 1.4km