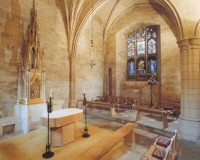 The founder of US University John Harvard is celebrated here.

Description: A famous historical figure associated with St Saviour's was John Harvard, who emigrated to Massachusetts and endowed Harvard University. He was born in Southwark in 1607, a butcher's son, and was baptised in St Saviour's - the relevant entry, with his father's signature, is in the Cathedral register.

He is commemorated by the Harvard Chapel, off the North Transept. This was originally the Chapel of St John the Evangelist, but its modern reconstruction was paid for with funds given by members of Harvard University.

The splendid stained glass window was donated by a Harvard graduate, and then American Ambassador to London, Mr Choate in 1905. He was present at its official unveiling on 22 May 1905. The window depicts the baptism of Christ and the arms of Emmanuel College Cambridge, which John Harvard attended, and Harvard University.

The communion table with its fine twisted 'barley legs' was the gift of Joyce, Lady Clarke in 1623. It was at one time the High Altar within the church. The Reserved Sacrament is housed here in an 1851 Tabernacle designed by Pugin.

John's mother, Katherine, lost husband Robert and four of her children to the Southwark Plague of 1625. Katherine remarried twice, and acquired ownership of the Queen's Head Inn on Borough Street. Borough Street had been lined with inns since Chaucer's time, each one a jumping-off point for a different destination.

The shop of Ignatius Sancho», 2.5km