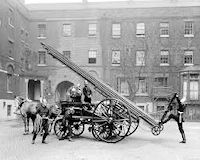 Description: Sir Eyre Massey Shaw (1830-1908) was a pioneering champion of health & safety and became the first Chief Officer of the Metropolitan Fire Brigade.

Eyre was born at in Ballymore, Cobh in Ireland where his early childhood was spent sailing boats and learning about the sea. In 1843, he went to Trinity College, Dublin and studied for a Bachelor of Arts Degree which he received in 1847. After four years in the United States he had witnessed a number of large fires and how they were foughthe returned to join the North Cork Rifles and start a family.

In 1860 Shaw sent his CV to Belfast City Council who were looking for a Superintendent of police and fire, following a serious fire. He did not have the knowledge and qualifications for the job, but got it and moved himself and the family to Belfast. The Belfast Brigade had just four fire engines, but Shaw enjoyed the role and started to make improvements.

The Tooley Street fire at Cotton Wharf in 1861 resulted in the death of Superintendent James Braidwood of the LFEE (London Fire Engine Establishment) and Massey Shaw successfully succeeded him.

The LFEE comprised 17 land and 2 river stations and 129 men and when he retired 30 years later, the Metropolitan Fire Brigade (MFB) comprised 55 land and 4 river stations, 127 street escape and hose-cart stations, 675 personnel and 131 horses.

Shaw was seen as a pioneering champion of safety and he was commissioned to provide safety reports across London on all manner of establishments including theatres.

In 1878, Capt Shaw moved from his City Station to new Headquarters built here at Winchester House, Southwark Bridge Road - featuring a new fire station and a house for the Chief and his large family. A heritage plaque was erected here in 2000 celebrating this.

It also included a fitting place for Royal visitors to attend and review London's firemen in training. During his duties, Capt Shaw made friends with the Prince of Wales. The Prince and his friends, the Duke of Sutherland and Earl of Caithness were keen firefighters and attended a number of incidents with Shaw. A uniform was kept available for the Prince at city fire station.

Shaw also became an Olympic gold medallist for sailing in the 1900 Olympics at the age of 70. Not without controversy, his involvement was much disputed, as many of the sailing crew were not properly documented.

The shop of Ignatius Sancho», 2.1km