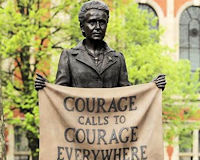 The statue by Gillian Wearing holds a banner with a quote from a speech she gave in the aftermath of Emily Davison's death during the 1913 Epsom Derby. It reads Courage calls to courage everywhere.

Dame Millicent Garrett Fawcett GBE (18471929) was a feminist and author, primarily known for her work as a campaigner for women's suffrage.

She became president of the National Union of Women's Suffrage Societies from 1897 (the moment depicted in the statue) until 1919, and in July 1901 she led the British government's commission to South Africa investigating conditions in the concentration camps that had been created there after the Second Boer War.

The names and images of these 55 women and four men are listed on the base of the statue; they also supported women's suffrage: