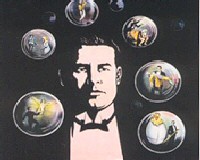 Description: This is the flat where legendary magician David Devant (1868-1941) lived at the height of his career. His real name was David Wighton.

The first president of conjuring society, The Magic Circle, was described by one critic as the greatest magician of all time.

He was a member of the famous Maskelyne & Cook company and performed regularly at the Egyptian Hall in Piccadilly. Many of his tricks involving the disappearance of human beings have seldom been attempted since, English Heritage said. His shows featured mysteries such as the `Magic Kettle' from which he poured any drink called for by the audience. His act has inspired contemporary magicians of the present day.

Devant's catchphrase was all done by kindness - and, by all accounts, he enjoyed popular appeal throughout his career.