The Duke of Yorks Theatre 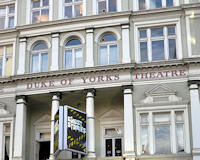 The theatre where Charlie Chaplins only stage performance was.

Description: The Duke of York's Theatre opened in 1892 as The Trafalgar Square Theatre for comic performer Frank Wyatt and his stage-star wife Violet Melnotte.

It was renamed to its current name in 1895 to honour the future King George V.

The theatre has shown many productions since, such as The Gay Parisienne, By Jeeves, King Lear, Death and the Maiden and the Rocky Horror Show.

It also made opera history at the turn of the century, when composer Puccini visited a production of the play 'Madame Butterfly' and was inspired to turn it into the heartbreaking opera of the same name.

JM Barrie's Peter Pan (The Boy Who Wouldn't Grow Up) debuted here on the 27th December 1904.

A 14-year-old Charlie Chaplin made his only stage appearance in 1905 here, in a production of 'Sherlock Holmes'.

In 1929 a meeting held in the theatre resulted in the creation of actor's union Equity.

The theatre was famous for having real fire places in its auditorium. It was grade II listed by English Heritage in September 1960, and became part of, and headquarters for the Ambassador Theatre Group in 1992.