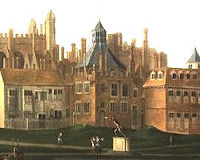 The Royal Cockpit as depicted by Hogarth.

Description: The Cockpit-in-Court (also called the Royal Cockpit) was an early theatre built by Henry VIII, located at the rear of the Palace of Whitehall overlooking St James Park.

It ceased to be used for cockfighting in Jacobean times, and was later used as a private theatre and chambers for the members of the Royal Household. Shows included some of the old classics by Marlowe, Heywood, Fletcher, Jonson, Ford, Beaumont and Fletcher, Webster, Massinger and Dekker.

It was redesigned in 1629 for Charles I by Inigo Jones as a private venue for staging lavish court masques but like all theatres was closed after the theatre ban in 1642, the Cockpit returned to use under Charles II.

It was refitted by Charles II in 1662 with a new dressing room for female players (a novel theatrical innovation). This room had its walls decorated with green baize - a possible origin of the theatrical term 'green room' for backstage waiting room. It also include a dais with private access up a special stairway, so that the king/queen could sit confronting the stage, his courtiers and ambassadors all round him.

The Cockpit-in-Court was one of the very few Shakespearean playhouses to be reused after the civil war.

The Cockpit provided inspiration for caricaturist William Hogarth whose print of a cockfight in the Royal Cockpit with a chaotic crowd is engraved 'Design'd and Engrav'd by Willm Hogarth', and at bottom right 'Published according to Act of Parliament Nov 5th 1759' is characteristically colourful.

Hendrick Danckerts also captured the exterior in a delightful contrast.