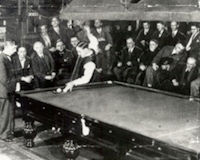 Designed by architect Andrew Mather, who also designed the Odeon across the square as well as many other cinemas.

Thurston's Hall was a major billiards and snooker venue between 1901 and 1955 was demolished in 1955 for an expansion to Fanum House. The Hall saw many important billiards and snooker matches take place here including 12 World Snooker Championship finals between 1930 and 1953. It was also the venue of the first World Snooker Championship match in November 1926.

The last competitive match at the hall was played from 13 to 15 January 1955 between Joe Davis and his brother, Fred.

In 2015, Fanum House underwent a massive renovation to improve much of the upper floors which were unsuitable for purpose.